Last week I wrote about the puzzling discrepancy between an increasing wage share for the top 1% on the backdrop of a falling wage share for the country as a whole. The first important takeaway is that labor share isn’t as relevant to stagnating wages or emerging inequality as many believe.

There is, I realize, a deeper connection between this fact and the broader debate of of the 1% and their “fair share”. We know that in America, like many other rich countries, capital’s share of income has increased substantially since 1970. (This is also around the year the GINI uptick begins which, I think, is an accident). We also know that capital is disproportionately owned by the rich: in 2009 the top 1% of Americans owned over 35% of all stock.

We would extrapolate from these stylized facts that non-wage income would play a disproportionately important role in the incomes of the wealthy. And we would be wrong:

(I’d should also include income from interest and land rent in the latter group but this, in general, followed the same trend and was relatively insignificant.)

This surprised me. Not only do we fail to see what would be an expected trend, but we see broadly the opposite: wages play an increasingly important role for America’s elite. To believe that every bit of the elite income advantage derives from productivity differences, as Greg Mankiw clearly does, would be to believe in not just a rapid divergence of human capital, but one so rapid as to make up for the emerging importance of capital gains.
I wanted to find out more about the distribution of wages over time but my site of choice, “The World Top Incomes Database”, doesn’t have such granular data. No less, given the 1% share of total income, labor share of GDP, and the wage share of the 1%, this isn’t hard to estimate with basic probability. As:

The probability a random dollar is “in the 1%”, so to speak, given it’s from earned income is obviously the wage share of GDP. The probability that you are in the 1% is, well… 1%. The income database from which my above graphs were created gives us the chance a random dollar allocated to the 1% comes from earned income. I estimated p(wage), using the FRED series (WASCUR/GDP), clearly labor’s share of income.

This gives me a time series the wage distribution, and I found the most curious thing: 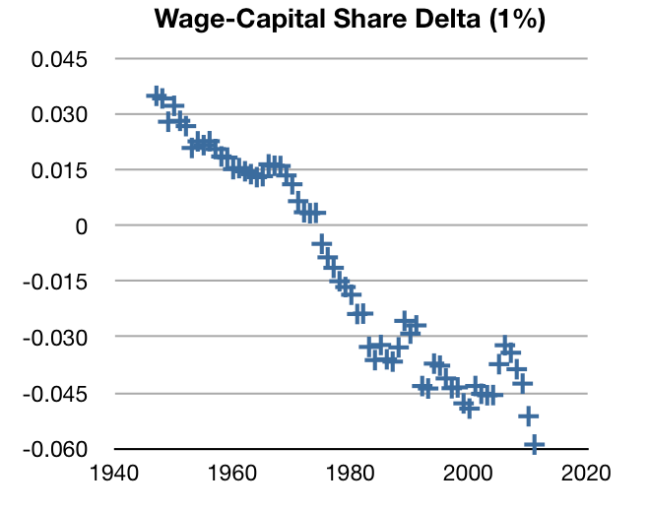 The y-axis is the difference between the share of total income captured by the 1% and the share of total wages captured by the 1%. It remained above zero till the late ’70s, implying capital gains, land rents, and other unearned income were disproportionately allocated to the wealthy relative to the country. That’s what you would expect. But increasingly since the ’80s, the capital discrepancy seems to be falling in favor of a wage discrepancy (both cannot increase at once, as they must all average out to the 1%’s share of total income).

And here’s why this is the case:

Ay, there’s the rub! If you look at the first two graphs, you’ll see that the top 5% and 1% move very proximately with the .05%. This is, of course, because most income going to the “affluent plus” category really goes to the super-rich. Members of the top .05% earn, on average, almost 2 million dollars annually most of which are bonuses. This lends support, I believe, to new evidence, from Josh Bivens and Lawrence Mishel, suggesting that the supply-side tax cuts of the ’90s and noughties simply increased the chance and extent to which top executives negotiated for a higher salary.

If you define labor rent as the income over and above that which is required to keep an employee in his current position, nothing comes closer than negotiating higher just because the tax rate is lower. (I have other issues with the paper, for example, might this not indirectly support the claim that lower tax rates creates a desire for higher income, whether realized through rentiership or productivity).

Corporate governance is hard to measure. I do think, however, that the growing blur between the chief executive and chairman creates a severe principal-agency dilemma insofar as the allocation of unnecessary rents towards top CEOs. By this I don’t mean celebrity CEOs who number in less than one handful, but the unnamed mass that run public corporations.

Are we to believe that this CEO, just through genetic assortment (as Mankiw believes) and disproportionate access to opportunity (only 40% of Harvard is on financial aid, for example, that means over 60% of kids come from families that can afford to pay $60,000 a year) has not only increased his wages thusly, but to the extent that his increased wage dominates his increased income from capital? This means if wages really tracked productivity, the rich are at singularity. And probably beyond.

That is the question, I believe, so-called “defenders of the 1%” must answer. And other liberals, who love a good ol’ battle between labor and capital, should probably accept a falling labor share – for good – and try to promote a system that most equitably distributes opportunities given this constraint.

P.S. I’m in the process of crunching the same numbers for European countries. I’ve found  the increased wages for the French elite to be far more muted. Indeed, the French elite have seen an increase in the share of their income from dividends. Overall, the wage-capital discrepancy (accounting for changes in labor share, etc.) seem to be tamer. That said, the countries I’d most like to compare with America are Germany and the United Kingdom, neither of which has the granularity of data (through the Top Incomes Database) from less relevant countries like Italy and Spain.