the Economy: Home and the World
3 Comments

Mark Thoma takes us to David Andolfatto on why Bitcoins and gold “make lousy money”:

And why stable inflation isn’t so bad after all:

Is it important for a monetary instrument to hold its value over long periods of time? I used to think so. But now I’m not so sure. While I do not necessarily like the idea of inflation eating away at the value of fiat money, I don’t think that a low and stable inflation rate is such a big deal. Money is not meant to be a long-term store of value, after all. Once you receive your wages, you are free to purchase gold, bitcoin, or any other asset you wish. (Inflation does hurt those on fixed nominal payments, but the remedy for that is simply to index those payments to inflation. No big deal.)

The point Andolfatto is making here is actually intimately connected to a piece by Tim Duy a few days back arguing that the Federal Reserve can only successfully achieve two of: low inflation, full employment, and financial stability. The import of Duy’s argument is that we would have to tolerate significant asset inflation – increasing risk of financial instability – to increase employment without increasing consumer prices.

A lot of what he talked about concerns recent financial dynamics, but it’s worthwhile studying Medieval monetary policy in both considering the veracity of this claim and applying it to Andolfatto’s dilemma. And a new paper by Anthony Hotson at Vox is the perfect place to start. Today we control consumer price inflation, or a basket of goods that the government thinks represent our living expenses. Ipso facto, assets like equity are excluded (they aren’t necessary to live, after all). Back in the good ol’ days, under the gold and silver standards, governments controlled asset inflation. But to do this they had to let consumer prices go haywire: 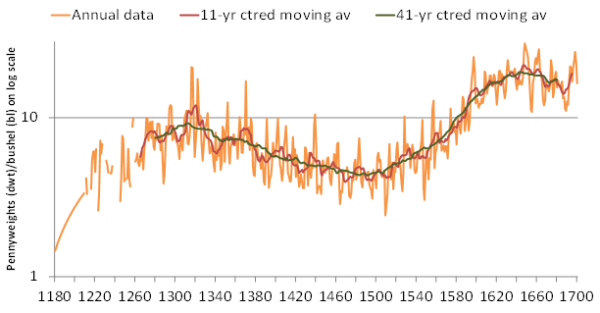 Or as Hotson explains this dynamic:

This provides pretty solid backing to Duy’s argument that if we provide asset price stability, consumer prices will become highly volatile. And as Andolfatto argues, when the real value of money is highly uncertain on a daily basis – as the annual (light orange) data indicates – it fails to become unit of exchange. Of course there is stability vis-a-vis the money value of bullion, but this is hardly useful on a day-to-day basis.

But my conclusion is slightly different than Andolfatto’s:

If the existence of a gold reserve does not prevent a government from reneging on its promises, then why bother with a gold standard at all? The key issue for any monetary system is credibility of the agencies responsible for managing the economy’s money supply in a socially responsible manner. A popular design in many countries is a politically independent central bank, mandated to achieve some measure of price-level stability. And whatever faults one might ascribe to the U.S. Federal Reserve Bank, as the data above shows, since the early 1980s, the Fed has at least managed to keep inflation relatively low and relatively stable.

He speaks, rightly, that gold is not inherently better than fiat. Because we are using government-issued banknotes, revaluation can cause significant inflation, as did FDR. Arguably, it’s a lot easier to create inflation under a gold standard than with fiat currency. But the gold standard has an even more fundamental flaw, which is that by stabilizing bullion prices, consumer inflation can become highly volatile.

Indeed, consumer inflation could be solved by dropping the full employment mandate, and that is his chilling conclusion:

If Kocherlakota is correct and monetary policy can only pursue the dual mandate in the context of financial – and, by extension – macroeconomic instability, then we really need to consider which part of the dual mandate needs to be loosened to reduce the reliance on financial instability.  My fear is that if Fed policy makers were asked this question, they would unanimously answer that it is the full-employment portion of the mandate that should be jettisoned.

Let’s pay heed to history. Jeremy Stein is smart, and knows that bankers are on a binge of cheap money right now. This might be a reason for expansionary fiscal policy.* But unless we renege on consumer price stability or full employment, now is not the time to cut back.  We save and invest in assets (perhaps gold and Bitcoins). It is important to maintain short term price stability of currency, but not its status as a store of value.

*An interesting question is whether this brings doubt to the “Krugman condition”. Even Krugman, the poster child of fiscal policy, believes it is justified only at the zero lower bound. If financial instability is of key concern, might there be conditions where of tight money and deficits come hand-in-hand?