The housing market started teetering sometime in 2006. The investment banking crisis climaxed in September 2008 after Merrill Lynch was acquired, Lehman Brothers failed, and Goldman Sachs became a bank. Over this week both the incumbent and future presidents would talk about the upcoming financial crisis. The commercial banking crisis became acute toward the end of 2008 through Citigroup’s second bailout in 2009. The unemployment rate starts ticking up in 2007, hits 6.5% in October 2008, and races through a 10% peak in October 2009. It’s not until 2013 that it falls back to where it was a month after Lehman. This was the opposite of overnight.

Yet you might miss that in consumer search activity. 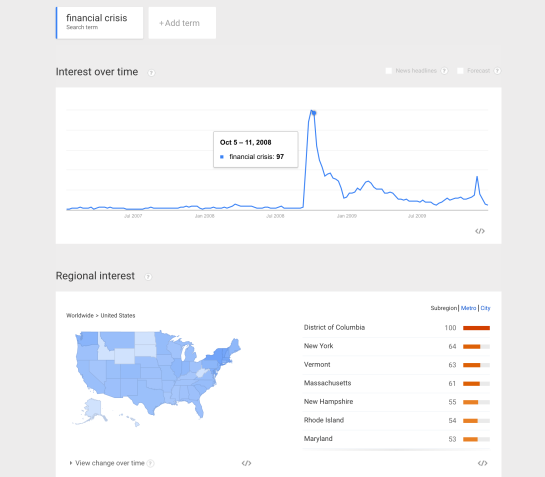 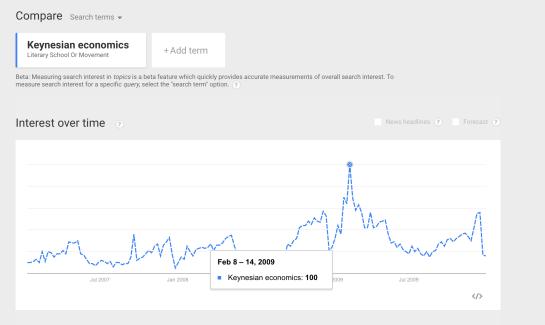 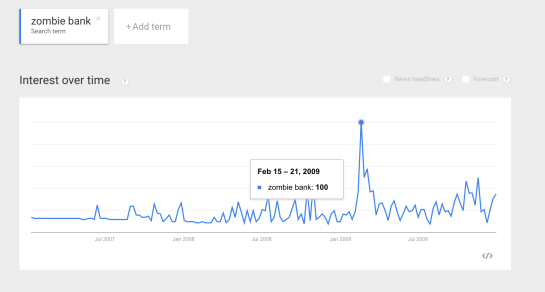 Sometime after September 15 Americans thought the world might burn. And sometime by October 10th they decided everything was fine. Notably most of the peaks in the charts above, typically between September 28 and October 11, were post Lehman. This isn’t a feature of lagged searching, searches about the Lehman bankruptcy peaked in on September 14. This is no coincidence. A little over a week after Lehman failed, Americans watched their Treasury Secretary warn of economic calamity if TARP wasn’t passed. By the end of September a chorus of other luminaries were threatening economic doom. TARP was finally signed into law on October 3.

What’s fascinating is the compression of fear over two weeks that wouldn’t turn out to be very relevant for the American consumer. The stock market was flat or up for at least two weeks after Lehman failed, and Americans were calm and would remain calm after the market decline started in earnest. Nor did concerns about financial stability really return in 2009, even though unemployment soared and the commercial banking system remained weak.

While September 2008 was an important moment for the investment banking crisis, it wasn’t particularly relevant to most Americans. Families didn’t have deposits at Lehman, and didn’t borrow from Goldman to fund their home. Even interest in the housing crisis, which was brewing for at least a year if not longer, surged as the investment banks failed. Nor did search interest in crisis return prominently towards the end of the year when the banking system was in shambles.

Even the moderate increase in interest for “bank bailout” and “banking crisis” in the first quarter of 2009 doesn’t nearly match the same for late September 2008, before the banking crisis really even started. Of course this might be a distinction most searchers ignore, but the spike in “banking crisis” we observe in January-March 2009 that we do not observe in “financial crisis” suggests there is some discrimination. Of course the big difference was that by 2009, America’s wise men stopped warning of economic doom.

I’m not going to pretend I understand this data, what this data means for consumer sentiment, or what consumer sentiment means for the economy. But it strikes me as quite plausible that the incredible fear American political leadership provoked at the end of September 2008 may have had repercussions magnifying the the economic downturn. The official chronicle of the crisis plays so much lip service to “stigma” and “confidence”. It’s peculiar that there were some people who probably tried to force Bill Gates to accept TARP funds to conceal the obvious fact that Citigroup was desperate – but not concerned that this parade increased search interest in terms like “is my money safe”, “is my 401k safe”, or “next depression” by 100-fold.

For some searches we don’t see an immediate return to normal.

Within two weeks we observe a regime change in concern about a “great recession”. It’s hard to explain such a sharp change from September 15 to October 10 without considering the political theater that was considered necessary to pass TARP. It doesn’t strike me as unreasonable that the anxiety that follows from watching your Treasury Secretary talk about the next depression could have an acute impact on durable good and other luxury purchases, at a time when the economy was already underperforming.

I’m not suggesting that stress in the broker-dealer system was irrelevant to overall financial stability. But they weren’t directly relevant to most Americans. To the extent they were economically relevant, it would be indirectly felt through the commercial banking system. There are many times between 2007 and 2010 when Americans could have been reasonably scared – when house prices started falling, when subprime lenders started failing, when bank failures picked up, or when unemployment exceeded 10%, among others.  That this fear only appeared during September 2008 appears to be the outcome of a deliberate decision to scare people into legislating bailout.

This isn’t a criticism of the fairness or efficacy of TARP. Just the observation that a six sigma spike in “is my money safe” probably doesn’t lend much to credibility and confidence in the banking system.