the Economy: Home and the World
9 Comments

Cliff Asness provides a qualified defense of a 2010 letter to Ben Bernanke he endorsed, warning that further QE would “risk currency debasement and inflation”. The piece boils down to the clash between priors that have not come to pass and observed reality. In theory, this is a fair defense: elevated risk of hyperinflation, if accompanied with a similar increase in risk of forever deflation wouldn’t alter the long-term expectation. Paul Krugman responds that Asness fundamentally misunderstood monetary theory – that when short-maturity debt substitutes perfectly for cash, an increase in money cannot increase prices.

That’s not necessarily sufficient. Expected inflation of 2% can be sustained if the entire market believes that inflation will, indeed, be between 1.5% and 2.5%. It would also be sustained if half the market thought inflation would average -2% and the other half thought it would hit 6% – except the Fed’s expected loss function is higher in any scenario of the latter world.

So the question we need to ask is whether the market price of inflation risk beyond some threshold increased because of quantitative easing. And because of the exciting market of inflation floors and caps, we can actually answer that question. Before we answer this question, it’s worth qualifying the value of this analysis, and explaining the nature of the market.

An inflation cap is effectively an out of the money call option struck at some inflation rate for some maturity. Normalizing the payoff at $1 per point, the we can denote this as C(10%, 5) = max{n – 10, 0} where n is the average inflation over 5 years. Then, at every moment in time, we can not just identify the expectation of inflation over a time period, but the probability density function thereof.

Various options pricing frameworks can be used to determine the implied PDF, though I think the partial derivative method using a forward measure is the most common. (This just means future cash flows are discounted by the yield curve of a well-traded bond, instead of a risk-free rate that you don’t know in advance).

Unfortunately, comparing the market for inflation caps with the TIPS (a standard estimate of inflation expectations) is tricky, since it’s far less liquid, and incredible new (introduced, conveniently, around 2008). Therefore, we need some sort of sanity check that the values generated from this data make sense without making huge adjustments for liquidity and risk premia. Looking for an answer, I came across a paper by Yuriy Kitsul and Jonathan Wright at the Fed that exploits a quirk in the TIPS payoff mechanism to see how well it matches the options data.

While you normally think that it’s only possible to infer an expectation from the TIPS breakeven, under reasonable assumptions, it’s actually possible to figure out the market’s expectation that there will be deflation (a cap of 0%) over some time period. The asymmetry that TIPS must payoff its entire nominal face value, even if there is substantial deflation, means that TIPS is actually a compound security: long pure TIPS and long a 0% inflation cap.

Therefore, we can compare the explicit inflation caps implied probability of deflation with the TIPS implied probability of deflation. And what researchers find is even if they don’t match perfectly, they are almost perfectly correlated suggesting that even if the level of the inflation caps market is distorted by liquidity concerns, the dynamics thereof are legitimate.

And now we can answer the question at hand: did the risk of high inflation increase after the Fed engaged in QE2? (Note this establishes a correlation, not causation). Per Kitsul and Wright: 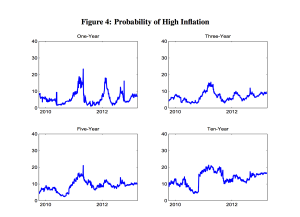 And you see two very interesting trends: the probability of high inflation (that above 6%, which is the largest traded strike) sharply increased over the latter half of 2010 and early 2011, the time period over which the effects of QE2 were priced in. This is a general trend across all maturities. While the 3, 5, and 10 year option follow a similar path afterwards, the 1-year cap is much more volatile (largely because immediate sentiments are more acute). Still, you see the probability of high inflation pic up through 2012, as QE3 is expanded.

The takeaway message from this is hard to parse. This market doesn’t exist in the United States before 2008, and isn’t liquid till a bit after that, so it’s tough to compare this with normal times. While the sharp increase in the probability of high inflation would seem to corroborate the Hoover Institution letter, that wouldn’t mean much if it simply implied a return to normalcy. That’s just a question we’ll have to leave for a later day.

The punctuated volatility of immediate, deflationary threat is interesting. Moving away from changes for a second, the risk of deflation was consistently higher than that of inflation (though we shouldn’t take this too seriously given liquidity issues) – but only over the span of one year. Over ten years, the likelihood of high inflation was much higher than that of deflation.

What we can learn from the deflation PDFs is that long-term deflation was never a concern in the US (it would be interesting to conduct a similar analysis on the UK and EU, something I’d be happy to do if anyone knows where this option pricing data is – help!) The immediate dynamics are a whole different game. QE2 seems to drastically reduce the chance of deflation, to basically nil, but this isn’t persistent and there’s a lot of volatility. Though it does look as if QE3 was responsible for the death blow, with the likelihood around 10% by the time purchases peaked at $85 billion.

So where does this bring us on Krugman v. Asness?

An important argument the money manager made in his essay is that this question may be decisively settled for the short-run, but we still haven’t successfully exited from this period of weird, unconventional policy regime: the risk of inflation still exists seems to be the message. Markets agree with this: with the 10-year inflation cap probability of high inflation nearing its peak. That said, there’s a good chance, that 2008-2010 represented the trough of high inflation probability – the increases afterwards seem to be a return to normal more than anything else. A 20% chance of inflation above 6% isn’t too bad – and it’s important to keep in mind that the levels of this market are probably biased by selection, risk, and liquidity.

More importantly, the probability of deflation, and variability thereof, moderated. But here’s the end result: 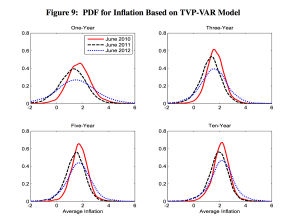 The probability that we’re going to have 2% inflation over the long-run decreased from around 70% in 2010 to 40% in 2012. There’s been a marked increase in the standard deviation of the PDF, which is cause for concern.

Again, I don’t want to put too much stock in these numbers – until we have reads from more normal times (again, anyone, data? I would love to replicate this for 2014 USA, or Europe).

These numbers neither provide a roaring endorsement for QE nor one for some crazy increase in the risk of inflation. While you can defend your use of the word “risk” against failed expectations – there’s a distribution, after all – it’s hard to protest when the increase in risk itself, as priced by the market, has been so modest.

That said, the QE can’t increase inflation in a liquidity trap argument is also unconvincing. There’s little theoretical reason to believe that once the growth rate picks up and overnight bonds are once-again priced at a discount, the exit from unprecedented stimulus wouldn’t cause inflation to increase as the monetary transmission mechanism kicks in, and the money multiplier roars back to life. There is good reason to think that this isn’t going to cause any hyperinflation (not the least that the Fed wouldn’t let it), and “debasement” was certainly too alarming a description.

This letter suffers more from some of its signatories, like Niall Ferguson, who go on to defend its claims with dubious nonsense from Shadowstats than pure content it self. It was wrong, but derivatives markets suggest that inflation risk has increased.

The big departure I’d take is in arguing this increase wasn’t enough to flush out the debt overhang. Though, one ought to ask, whether a better way to get there was moving the distribution to the right, or increase its standard deviation.