Vox reports (but makes no editorial comment on) a Census Bureau chart showing a steep decline in middle class wealth between 2005 and 2011. This is a sensitive topic, and on the heels of Piketty, who advocates a global wealth tax, one that may fuel progressive criticism of increasing wealth inequality. While the economic malaise of the poor is something we need to address, thinking through the lens of wealth is the wrong way to go about it.

For one, median household wealth tells us less than a lot about living standards, inequality, or economic power. 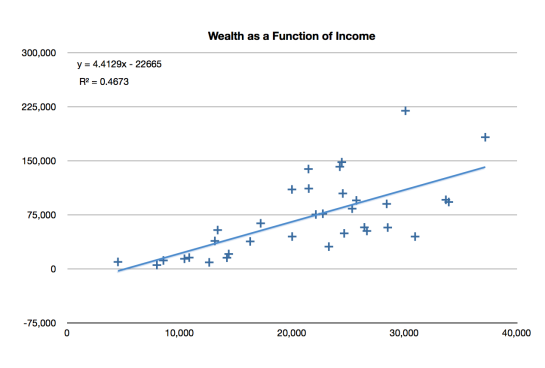 At least among OECD countries, non-income factors account for a majority of the variation in median wealth. (The relationship is stronger for the per capita counterpart, but that is skewed by a long, right tail.) Income does clearly determine a good bit of wealth, but no one would walk away convinced that the median Slovenian or Spaniard is actually richer than the American. That isn’t to say income per se is an effective measure of living standards either: wealth provides a sense of security and certainty for bad times, but that is surely of second order importance.

But the more important point is, if there’s a measure in which a country like Israel is almost as rich as America, it’s a bad measure. At least to measure median economic prosperity. And the problem comes in measuring wealth. While we may think of it in its accounting reality, assets less liabilities, its better to think of trends through a more fundamental definition: that is a claim on future output. Wealth, after all, is the discounted present value of the future cash flows from your net position.

There’s a bigger angle to this as well. Healthcare is going to be a large part of future output, and that’s something we kinda sorta socialized between 2005 and 2011, supposedly the time period over which middle class wealth plummeted. And yet, as we each have a more equal claim on what will be a growing component of future output, implicit wealth inequality falls. Nor does this include social security and disability, which surely represent a big chunk of middle class wealth.

Wealth, unlike income, is intertemporal. Measures of wealth inequality, unfortunately, are not as nuanced. I would venture to say, however, that anyone who thinks the utility of middle class consumption over the discountable future actually fell by 35% in absolute terms better prepare for armed revolution.