the Economy: Home and the World
22 Comments

Ezra Klein has a nice segment on Vox explaining why wealth inequality is dangerous for America. And worse than its oft-mentioned cousin, income inequality. Given my political biases, it is very easy for me to accept this claim, and I’d probably favor most normative conclusions Ezra may reach. That said, the numbers in this argument just don’t work out. I think two diagrams make this point perfectly clear. 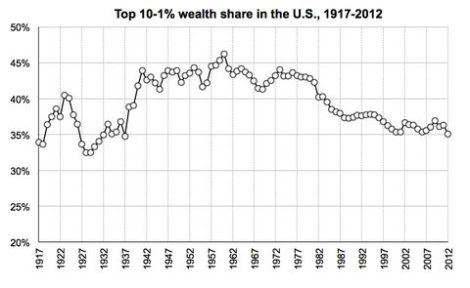 What you notice here is that wealth inequality isn’t really a problem of the top 10%. Or 1%. Or even really 0.1%. It’s the tippy-top 0.01% that are driving the trend. Or just over 30,000 individuals. And from what we know about this group, most (61%) are bankers or other high-rung executives, with a few doctors and lawyers mixed in.

This isn’t exclusive to wealth. The pristine echelons of the one percent dominate the income distribution more than Occupiers would have you believe. But there is a startling difference between the two, the income share of affluent Americans – top 10% without the 1% – hasn’t markedly declined either.

So when you consider wealth inequality it’s important to note that you’re really talking about a problem that concerns fewer people. As a motivating example, consider the ratio of wealth between the richest man and median man. Would this figure yield any insight into the nuances of the sociopolitical power structure? Hardly. No one would say Bill Gates is the beneficiary of inequality, that he is so wealthy is an independent phenomenon.

That isn’t the case for the relative salary of an investment banker to a plumber, which (in no negligible part) is a result of changes made the tax and regulatory code in favor of top earners. In that sense, income inequality is actual a tangible phenomenon. We can identify winners and losers of the Gini map over the past thirty years.

Is the mind-blowing wealth of 30,000 Americans absurd? Sure. But it would be difficult to say, as the video suggests, these elite are beneficiaries of any inequality other than owning the right capital at the right time. (Indeed it is capital gains in the stock market that drive the income of this group).

And therein lies the problem of arguing wealth inequality is uniquely more worrisome than income inequality. The bankers and, more likely, executives we’re talking about are so rich because of income inequality. With many corporate boards effectively subservient to managerial executives, C-suite officers have the ability to more or less set their own income, independent of productivity and marginal value added (which, granted, is tough to measure for highly skilled people).

The key forces driving income inequality are driving wealth inequality. And while Piketty’s book is in vogue right now (disclaimer: I’ve read only 100 pages so far), there is nothing especially bad about the current distribution of wealth relative to income.

Now one may argue that, of course, wealth and income inequality are correlated – but the real thing to worry about is wealth. While that may be true in some specific circumstances, political donations for one, in general it is very false. We’re told the richest hundred (or so?) people control as much wealth as the bottom 50% of the planet. Or, as Ezra cites in his video, the Walton family is richer than the bottom 30% of Americans combined.

That sounds scary, but it’s also a rather meaningless statistic. A middle-class homeowner with a mortgage in a bad housing market isn’t as wealthy as an Indian slum dweller without access to credit markets. But has an infinitely higher income. Many poorer and lower-middle class Americans are in debt which, sometimes, exceeds their assets. Hence ratios of wealth make little sense. You may want to argue that indebtedness of our poor is a really big problem – and I would be inclined to agree – but that’s a different conversation.

Nor is it clear that wealth plays an especially central role, vis-a-vis income, in political control. It is important to caveat this point (and, really, this entire post) nothing that wealth engenders income engenders wealth, and therefore distinguishing between the effects of either is difficult. However, as proxy consider these two tables from the Sunlight Foundation.

Here’s the important theme. In the second figure, there’s a discrete break between the individuals of the top 0.01% giving more than $500k and those not. Specifically, the amount given the “independent expenditure groups” increases from around 10% of more moderate donors to 90% of all deep donors. The proportion of donors identified as “ideological” also increases very quickly.

You might say that that these ideological donors are a product of wealth independently of income. But corporate donations are usually motivated by more specific (not to say benign) interests geared towards income. Now going back to the first graph, it’s clear that even though the 0.01% more than doubled their share of national income over the time period considered, ideological donations didn’t increase all that much, and corporate donations have remained steady.

There might be a sense in which corporate interests are driven by wealth, but that’s not the argument proposed by the Vox video. Instead we are told to worry about the political influence of heirs bathing in a pool of their parents dough. No – you can always trust corporations to focus on one thing, and that’s profit, not wealth.

Of course, a number of assumptions were made in this highly indirect argument. But regardless, no one (to my knowledge) has actually made the statistical case that wealth inequality, as a phenomenon emerging independently of income inequality, is responsible for the “doom loop of oligarchy”.

Sure the bottom 95% are doing a little worse and the top 5% a little better today, but the changes are nothing near the drastic increase in income inequality in the same time period. This suggests policy has changed favoring high income over low income in a much clearer fashion than high wealth over low wealth. This isn’t surprising given that much of the richest 0.01% are executives and bankers, not heirs to mounds of wealth. After all, it is the group of affluent-but-not-rich people for whom we subsidize housing (indeed more than we do food for the poor!) It is for the doctors we protect the medical market. It is for the middling executives and partners at law firms nobody has heard of we decrease taxes on those earning more than $200k. It is for the top 15(- top 2)% of Americans who couldn’t afford frequent flights to Florida without Spirit or Southwest we refuse to tax carbon emissions from airplanes the way they should be!

That wealth inequality in America is as low as it is, given the income distribution, is remarkable. In fact, the role inherited wealth plays at the top seems to be diminishing:

Overall, Figures 5 and 6 show a trend in the Forbes 400 list away from people who grew up wealthy and inherited businesses towards those who grew up with more modest wealth in the family and started their own businesses.  These changes largely occurred between 1982 and 2001.

If you read the whole paper, what you learn is that the a key driver of success for these stalwarts was growing up in a middle-class to mass affluent family with access to good education at an early age. Good education, note, means motivated teachers and up-to-date technology: something you’re as likely to find in a nice suburb as you are in Phillips Exeter.

And that takes us back to the point about income and wealth. Wealth inequality has always been pretty bad. There’s a reason the Vox video shows a time series of income shares but not wealth shares. Wealth, by definition of how it is constructed, will always be more concentrated. The burden is on those arguing that wealth inequality is a key concern to explain why the relative increase (if it even exists) is bad.

In the mean time, I would rather worry about something that actually concerns most of America, like income inequality. I’m talking about meth addicts in “white trash” neighborhoods that are overworked with two jobs. Or the inability for so many parents to furnish their children with good technology and educational enrichment. Or the shitty healthcare they probably have. Or about the total stagnation of incomes for the bottom two-thirds of the income distribution.

These people will never have any real wealth. And, frankly, if we can find a way to get them jobs, higher wages, and a steady retirement, I can’t even begin to see why it matters.