the Economy: Home and the World
3 Comments
Earlier today Matt Yglesias borrowed a chart from Thomas Piketty’s new book noting that public assets remain above public debt. This chart actually underestimates the strength of our balance sheet.  A more striking image is the ratio of our gross national product (GNP) to our gross domestic product (GDP). 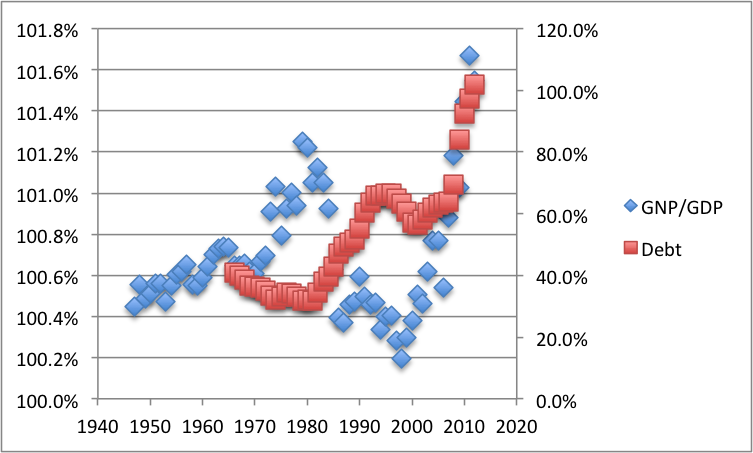 The left axis here is a pretty narrow range, so the dynamics aren’t as extreme as they first seem, but what you’re seeing is that the GDP-GNP ratio is at it’s highest pint in history and continues to rise. What does that mean? Remember from Econ 101 that the GNP = GDP + American income on foreign assets – foreign income on American assets. In essence, the ratio I’m graphing shows that over the past decade net inflows have grown substantially faster than GDP, despite the skyrocketing debt. (Since GNP/GDP = 1 + (net payments)/GDP In fact, you would expect precisely the opposite phenomenon, more so than ever before as our deficits are increasingly financed by foreign savings (interest payments to domestic pension funds cancel out). As Wikipedia recites basic economic wisdom:

It’s worthwhile asking yourself what exactly national debt represents – a claim on future income. This graph suggests that our claim on everybody else’s future income is way higher than their claim on our income. You should be scratching your head – why are emerging markets throwing money at us when the domestic return on capital is far more attractive? They are lending us really cheap credit so that we can recycle that to our firms which then invest in foreign equities earning a huge premium. That should sound pretty familiar to you, because it’s basically how Wall Street made all of its money. America, basically, is a huge hedge fund.
But for the Federal Government, this isn’t a problem. We can always roll over our debt since the dollar is sovereign. We can actually make some pretty insightful observations taking the perspective that the government is a big bank. We could theoretically sell our foreign assets to repurchase our own debt (or, since we don’t have a sovereign wealth fund, tax our citizens more, which is the same thing) which is less volatile than emerging market equities (and isn’t subject to any currency risk). But we’d then be short emerging market, which means we would pay the risk premium rather than earn it.
The in-built short term volatility isn’t actually a big deal, either. In the long-run, equity indices are pretty well correlated with economic growth, and everybody else will grow faster than us on average. That leaves liquidity risk, but because the Federal Reserve exists even that is negligible. The currency implications of this are even more mind bending still. For most countries, a depreciation has a negative wealth effect – that is we can buy less on the international market than before in real terms. But the more our own inflows are denominated in foreign currencies, the less obvious this link becomes. That gives monetary policy more space as higher inflation would be a lot less detrimental for us than any other country.
People are happy to pay a premium for safety. We should be happy to earn that spread.