I’ve read a lot of posts recently claiming that the Fed should throw in the towel, because “US growth is not what it used to be”. That could be true. It’s very difficult to suss out structural changes, but it’s unreasonable to be puritanical that our problems can be solved with, and only with, more aggregate demand. At least if you define “solve” as returning to the 1990s boom. However, it’s a bit aggravating when people insist that this has anything to do with what the Fed should or should not be doing.

The Fed’s not in the business of increasing productivity growth or managing real GDP. As far as I know, no model suggests that the economy is hitting its potential when inflation is unanchored well below its long-run trend. In fact, aggregate supply doesn’t even matter right now. When consumers are leveraged to the hilt a fall in prices from a productivity boom would just increase balance sheet constraints in the economy as the real-value of debt rises.

The camp of economists that talks about monetary policy juicing up a dead economy – or whatever it is – likes model heuristics like NAIRU or the natural rate of unemployment, potential output, whatever:

Weak payroll growth, despite a speedy drop in joblessness, forced Bernanke in September to backtrack from a June statement in which he said the Fed expected to halt its bond-buying by mid-2014, when joblessness would be around 7 percent.

But some economists argue easier policy is not the answer given the economy’s shifting fortunes.

It’s not clear to me what monetary policy has to do with asset bubbles. We should either not care about those or, preferably, outsource that to the macroprudential regulators. Asset prices shouldn’t be a cornerstone of any monetary policy (which, incidentally, is why we should be skeptical of the wealth effect from quantitative easing). But let’s go back to what Deutsche Bank is saying. Quantitative easing and zero interest rates will cause inflation because potential GDP isn’t what it was. However, this would require accelerating inflation as “artificial” demand competes for a shrinking stock of free labor. We’ve got precisely the opposite phenomenon. Either demand is not high or the growth potential of the US economy has surged (and while that’s good for the future, it doesn’t do squat for us today).

More importantly, people obsessed with asset markets are confusing noise and signal. Yes, real estate and equity markets have picked up much quicker than the economy itself. This is a byproduct of their own demon – slowing population and productivity growth. Let’s go back to the simple and elegant Harrod-Domar-(Solow) model. The wealth-to-income ratio (which determines asset prices) is determined as:

b = s/g where s is the national savings rate and g is the growth rate. The lower the growth rate the higher the wealth to income ratio. This is important because it suggests all this whining about interest rates and asset prices has very little to do with monetary policy. Interest rates have been in secular decline since the ’80s: 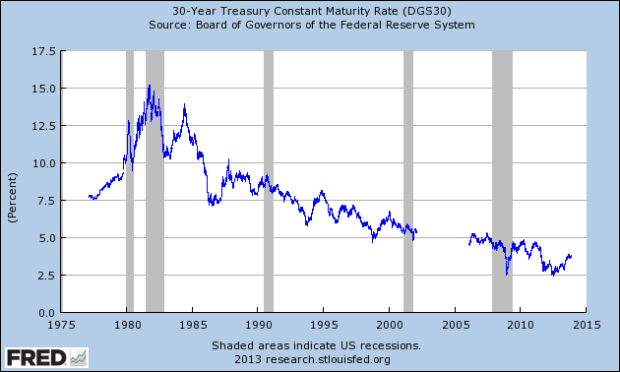 As Piketty and Zucman thoroughly confirm, the wealth-to-income ratio increases as would be expected under conventional models. Any observer notices that this trend in interest rates is completely independent of monetary policy in the past few years. Growth has been slowing down which means much more wealth is chasing much less capital, resulting in a falling labor share, and low interest rates.

It is a tautological position to suggest the Fed should change course because low growth will cause asset market bubbles and hyperinflation. However, with the long-run supply side costs of persistently low demand (hysteresis) it might just be self-fulfilling. Let’s hope it doesn’t get there.