the Economy: Home and the World
4 Comments

Jeffrey Dorfman, somehow a professor at the University of Georgia, has the scoop in Forbes India. Normally, it’s not even worth writing about articles that are misleading and profoundly confused. But when it comes from someone of supposed repute making the worst possible argument a rejoinder can be important. I’m writing this post as much for the pro-Austerians as the pro-Keynesians. It would be smart for the anti-stimulus crowd to disavow the worst arguments made to their effect, like this from Dorfman.

First, I ask the Forbes editors, how they used literally the same title for two, entirely different articles:

(Both are bad; the latter is infinitely superior to the former. And what’s with the asymmetric punctuation?)

Of course, when an article starts with a moral, economic, social, political, and philosophical absolute like “Government spending cannot generate economic growth” we already know a train wreck is en route. No meta-rational person could possibly write something so absolute. (Frequent readers know that I don’t discount supply-side factors at all, and have written about their recent importance contra singly-demand side theories). More refined believers of Say’s Law sometimes criticize Keynesians for misrepresenting the idea as simply as “supply creates its own demand”. (David Glasner, by the way, has some of the best analysis of Say’s Law in a sensible context). But here’s Dorfman claiming the Keynesian caricature:

You cannot buy a product unless somebody has manufactured it and is ready to sell. If supply is unchanged, an increase of demand results in bidding among buyers and higher prices. More demand without more supply does no good. Therefore, economic policy should focus on the supply side, encouraging businesses to invest and create.

Several things here confuse me. I was taught that aggregate nominal demand is the sum of consumption, investment, and government purchases. It would seem to me that “encouraging businesses to invest” would then constitute “aggregate demand”. Was I taught wrong? More likely, “encouraging businesses to invest” – as demand side a phenomenon as that may be – is just code for tax cuts and deregulation. (The former of which, by the way, is stimulus spending!)

More importantly, unless one rejects wage rigidity completely and absolutely “higher prices” are exactly what the economy needs. Then again it is entirely possible the writer believes that “aggregate supply is always an everywhere a vertical phenomenon”.

And then comes the kicker:

Data on 30 European countries from Eurostat, the official statistics agency of the EU, show that only eight countries cut government spending between 2008 and 2012. Of the eight, only Iceland and Ireland faced significant outside pressure to impose austerity. The others are Bulgaria, Latvia, Lithuania, Hungary, Poland and Romania.

Many countries that have purportedly tried austerity and failed are not on the above list. Greece, Spain, Italy and Portugal increased state spending. Italy is the only one of those four whose hike in government spending (4.1 percent) is below the EU average of 4.9 percent over 2008-2012. Greece (8.3 percent), Spain (13.3 percent) and Portugal (5.8 percent) were more profligate than the average European government.

Aside from the fact that austerity must be measured on potential output – as elusive a statistic as that may be – it’s inane to write that there was no outside pressure for spending cuts. Here’s a nice (graphically, tragic otherwise) diagram from Reuters for Greece: 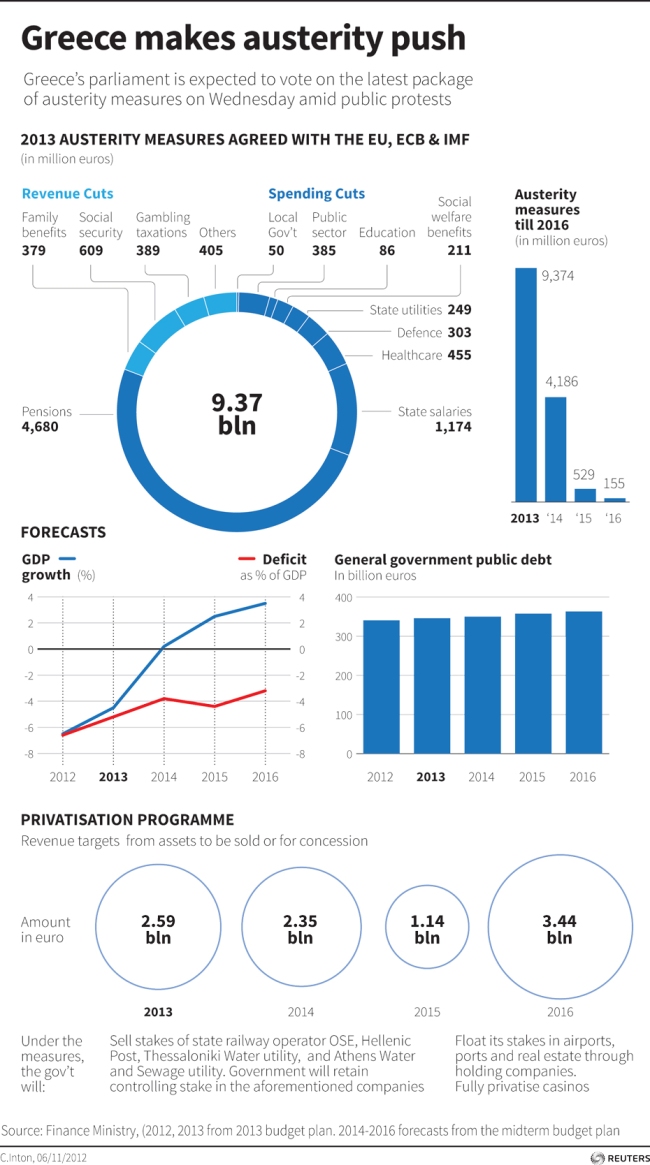 “Agreed with the EU, ECB, and IMF”, by the way, should be interpreted as “outside pressure”. A smart “real” indicator for austerity would be public sector disemployment. And that’s been tried across the pond here in the United States, by the way, not to any great avail. (Of course, the titling of this article suggests I do not share the same definition of “try” and its derivatives).

Eurostat also contains data on GDP growth rates from 2008 to 2011 (2012 data are not ready for all countries). In terms of GDP growth only two of the eight countries that practised austerity were below average: Iceland and Ireland. Iceland had a meltdown of its banking system, so it is a special case. Ireland had a big real estate bubble that popped, causing a bank crisis and enormous government deficits. Both were among countries with the severest recessions.

This is called making exceptions when your theory fails. Of course, more than eight countries practiced austerity and this makes no sense to begin with since countries that practiced austerity might have stronger fundamentals – like the United Kingdom compared to Greece. And, since the author is from Georgia, I wonder which other country had a “meltdown of its banking system” and “a big real estate bubble that popped” thereby “causing a bank crisis and enormous government deficits”. But this line of argument would suggest Dorfman agrees that random correlations do not suggest causation.

He, surprise, does not:

I actually wasn’t planning on writing this post until I read this paragraph. This was written by an economics PhD who teaches America’s tuition-paying students. And we’re talking about the University of Georgia, a taxpayer funded, research university. For one, citing a slope without a relevant r squared or a regression without a p value should be illegal. But slightly deeper statistical analysis isn’t even my point. Even if Dorfman doesn’t agree, were he to be making the best possible case against stimulus, would it not be worth at least noting the possibility that countries that engaged in deeper austerity had stronger fundamentals? That countries which couldn’t as rapidly curtail deficits had structural differences that makes said observation entirely useless?

Or, more importantly and subtly, while everyone (actually, read the article and scratch that) knows that “correlation does not imply causation”, few people really, intuitively accept that causation doesn’t imply correlation. I’ve discussed this in some more detail previously, but there is no reason to accept that Keynesians would only be right if “the correlation [was] positive”. By the way, to challenge your priors, check out Australia, which weathered the recession far better than any other country, and its government spending.

The Europe-wide negative correlation between government-spending growth and GDP growth, combined with the fact that three of the four countries with the best GDP growth tried austerity, suggests that austerity has some empirical support in Europe. This brief look at the data is not enough to prove austerity works, but it certainly has not been the widespread failure Keynesians claim.

A “Europe-wide negative correlation”, of course, is filler talk since it makes no sense to regress statistics randomly across a complex system that is the European economy. For example, the United States “tried austerity” and did way better than many European economies. Does this mean sequestration worked? Not really – just that hiking interest rates in the depth of a recession is really dumb. Not to mention the extremely small sample size.

If only economic zombie theories were as small in number as the extent of the data sets used thereof.

I’m sorry. Is Forbes trying to laugh at its Indian audience?