the Economy: Home and the World
4 Comments

Since today is “here’s a chart to prove why I’m right day” (Brad DeLong and Alex Tabarrok are playing, DeLong is winning), I’m going to make one of my own. I think it’s scary: 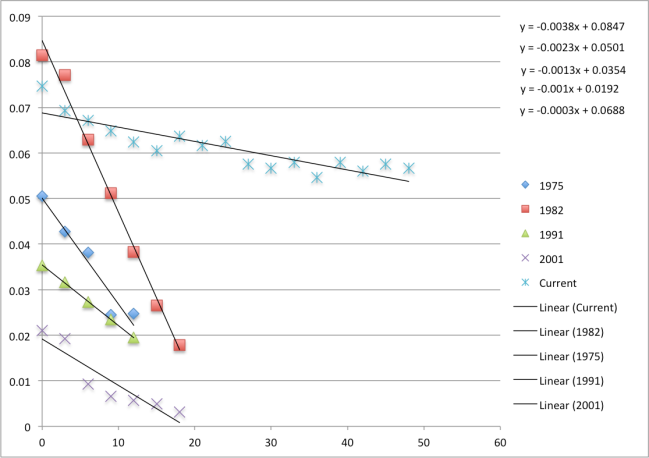 The y-axis is output gap as a percent of potential output. x-axis is months after the start of recovery. Take a serious look at this. If this isn’t frightening, I don’t know what is. There are a few things you should note:

Here’s a funny thing about the other crises – we didn’t engage in senseless austerity prematurely. Also remember, unemployment was worse in 1980. There’s good reason to believe the output gap elasticity of unemployment (“how sensitive is the unemployment rate to changes in output gap”) is higher as recovery deepens. This is because initial recovery seems to have allocated to the top earners. Employment has shifted from manufacturing to skilled positions requiring ownership of human or physical capital. $100,000 in the output gap can be filled by employing either one laid of engineer or five fry cooks.

So the good news is that even as the slow growth continues, unemployment should drop faster. The bad news is, it’s impossible to get employed after two years out of a job. That means the economy is giving up on a lot of people it can save by killing jobs today with austerity. Even if there are long-term consequences to debt, by keeping aggregate demand low, we’re loosing people forever.

This is a huge supply-side problem. We will regret letting the labor-force contract. And it doesn’t have to be this way. No honor in grabbing victory from the jaws of defeat. Europe’s already taken first place.

By the way, at this pace, we have another 166 months of recovery left. By that time we’ll have serious worries about long-run debt (something I actually worry about) and then we’ll have a real pickle on our hands. Because by then the would-be austerians will have an actual argument to make.

Front-loading deficit reduction is a ridiculous idea. There are big, hysteresis costs to not acting right now. Higher deficits will be a good thing. Here’s the secret about low-interest rates: they mean we’re not borrowing enough. And it’s not like the American government doesn’t have a bunch of really good, long-term, projects to fund. Roads, education, basic research, a space program all come to mind.

Paul Krugman likes telling us the American government can save itself by staging a zombie invasion. What if we invade Mars, Mercury, and the Moon instead. We’d get some cool gadgets, more scientists, and a recovery.